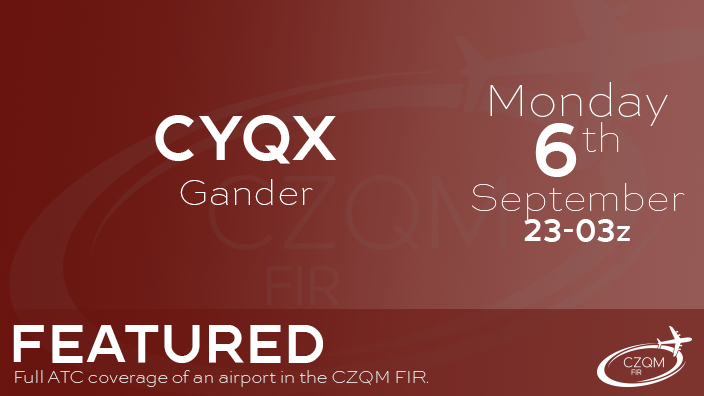 Name: Moncton Monday September Featured Airport
Description: In the eighth installment of our featured airports series, we will be staffing Gander (CYQX), Newfoundland and Labrador.

CYQX is both an international civilian airport and a Canadian Forces base operating under the names of Gander International Airport and CFB Gander. Though they co-exist, they are completely separate entities. Construction of the airport began in 1936 and it was opened in 1938, with its first landing on January 11th of that year. On September 11, 2001, with United States airspace closed because of the terrorist attacks, Gander International played host to 38 airliners, totaling 6,122 passengers and 473 crew, as part of Operation Yellow Ribbon. Gander International received more flights than any other Canadian airport involved in the operation apart from Halifax. The 6,595 passengers and crew accounted for the third highest total of passengers that landed at a Canadian airport involved in the operation, behind Vancouver and Halifax. The reception these travelers received in the central Newfoundland communities near the airport has been one of the most widely reported happy stories surrounding that day, and was dramatized in the musical Come from Away.

On our September 6th installment of Moncton Monday, join us in Gander (CYQX) as we reconnect the Canadian East Coast.

There are no comments to display.

You will be able to leave a comment after signing in